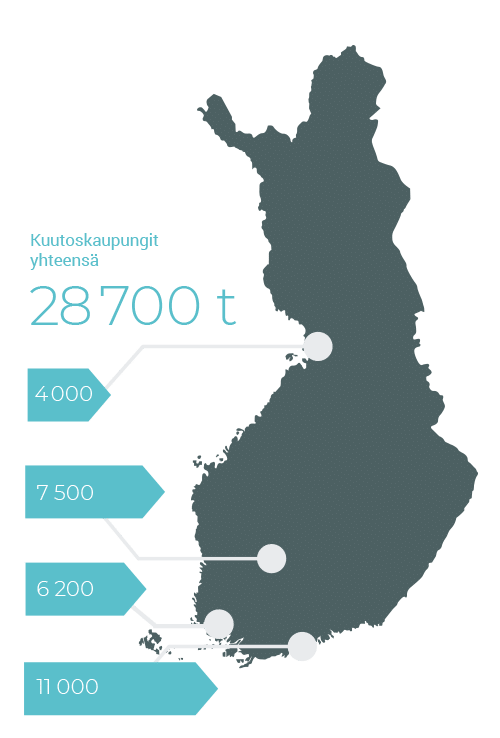 In Finland, the annual amounts of purchased and discarded textiles are almost the same, i.e., approximately 70,000 tonnes (13 kg) per inhabitant. Of the amount of discarded textiles, more than fifth is recovered. The rest, approximately 55, 000 tonnes, is, in practice, textile that is classified as waste (Dahlbo ym., 2015). The annual amount of textile waste is increased by the strong growth in production volumes, the deteriorated quality of the produced textiles, a drop in prices, and the strengthening of the clothing-related culture of disposal (Ahokumpu 2006; Dahlbo ym., 2015).

As a material, textile is very heterogenous (Jordeva ym., 2013), as textiles are manufactured from different fibre types: natural fibres, natural cellulose, regenerated fibres, and synthetic fibres (Zamani 2014). Furthermore, textiles and footwear often contain elements, such as buttons, zips, and rubber soles, that consist of other materials. According to a survey concluded in the Telaketju project, of the discarded textile separately collected in the Turku region, cotton (19%) and mixed and synthetic fibre materials (10% in total) were able to be identified. The rest of the mass consisted of duvets, pillows, coats, unidentified materials, or non-textile materials. (Knuutila 2017.)

In the capital region and the Turku and Tampere regions, textile waste was identified as a relevant material flow that is in need of new innovations. In the Oulu region, the textile waste mixed in with combustible waste has also been identified as a necessary object of development in order to guarantee more efficient utilisation. The growing recycling objectives and the separate collection obligation for 2020 suggested by the EU also encourage to search for recycling solutions for textile waste even though textiles do not, comprise that large a share of the household waste. For instance, in the capital region, textiles only comprise approximately 3% of the total amount of waste (PKS-jätevirrat -palvelu 2017).

Since textile waste is not separately collected at the national level, its material recovery is marginal and the textiles and footwear mainly end up in mixed waste, i.e., in energy recovery. (Dahlbo ym., 2015.) It has been estimated that of the textile waste that ends up in energy recovery, approximately 60% is municipal waste from households and the rest is mainly from industry and the service sector (Tojo ym., 2012). The textiles returned to stores are likely shipped to Central Europe, where they will be sold as clothes, shipped further to third countries, or processed in mechanical recycling. In Europe, mechanically recycled textile fibres are utilised, e.g., in upholstering in the automotive industry. The promotion of textile waste recovery is currently being looked into, for instance, in the Telaketju project. 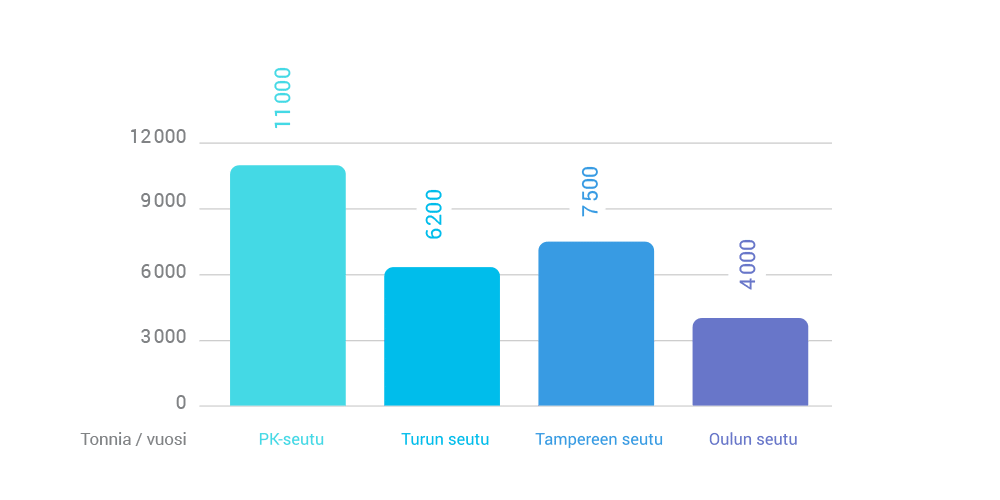 For textile waste, innovations are needed for the rationalisation of the entire recovery chain in order to make the textile waste recycling process cost-effective and, thereby, economically viable.

The textile waste recovery methods can be divided into mechanical, chemical, thermal, and combined recycling, as well as energy production, utilisation in bioenergy production, and textile composting. (Dahlbo ym., 2015). Nowadays, the mechanical recycling of textile waste is by far the most commonly used recycling method for textile material (Valente ym., 2014), as it is suited for both natural and synthetic fibres and undamaged and damaged textiles. The method is also inexpensive. Via mechanical recycling and waste refinement, textile waste can be directed to be used in products with a lower refinement value, such as filler materials and in industrial absorption products. Mechanical recycling does, however, damage the fibre structure, so the quality of the products deteriorates each time the material is recycled. Contaminated or dirty waste textiles are not usually suited for mechanical recycling. (Dahlbo ym., 2015). In Finland, there is currently one company, Dafecor Oy, which manufactures new products from textile industry surplus material (Dafecor Oy 2017).

Chemical recycling can be used in the waste recovery of textiles manufactured from both synthetic and cellulose-based fibres. Chemical recycling is a method with a higher refinement value, with the aid of which fibres can be produced for the manufacture of new textiles. In Finland, a chemical recycling method has also been developed for cotton, but there is not any large-production yet. (Dahlbo ym., 2015).

Separating fibre types from each other is, in any case, challenging and the lack of technology suited for the recycling of different fibres complicates, for its part, the material recovery of textiles (Zamani 2014). The small quantities of homogenous textile waste has also been regarded as one obstacle in the development of textile recovery. Increasing the amount of recycling would require extending the separate collection to also cover the collection of textile waste. Moreover, products manufactured from recycled materials require constant demand created by, e.g., public procurements. In addition to the current manual sorting of different textile types, the implementation of automation is also required to boost the sorting of the fraction that is to be recycled. Some chemicals used in the manufacture of the textiles and dirt accumulated during their use may also hinder the technical processes in the recycling of textiles (Dahlbo ym., 2015).