About 2.2 million tonnes of building construction waste is produced in Finland each year (soil displacement not included), which includes metal, wood, concrete, bricks, cardboard, plastic, and electronic waste (Hämäläinen and Teriö, 2011; Ministry of the Environment, 2014). Of the construction waste, about 27% is demolition waste, 16% building construction waste, and the overwhelmingly greatest part, 57%, is waste from building renovation work (Ministry of the Environment, 2014). Recycling construction waste is a powerful way to reduce the environmental burden of construction, and it has a notable role in achieving the targets for sustainable development in construction. The higher the value (i.e., the closer to the original usage) in which the building component is utilised, the less is lost in terms of the material, energy, and work invested in it. Many building components and load-bearing parts can be reused as they are. The environmental benefits which can be achieved through reuse are generally more significant when the reused structure is more energy intensive, massive, and heavy (Huuhka, 2010).

It is difficult to estimate the percentage of construction waste which comprises reusable materials, because numerous factors affect the potential for reuse, such as the building material, the demolition method, and the exposure of structures to weather conditions. There are also significant differences in the reuse potential within individual waste fractions: for example, in one case 26% (Höglemeier et al., 2013) of construction wood has been judged to be reusable whereas in another case this figure was as high as 90% (Gustavsson et al., 2006). In addition to wood, other materials such as concrete can be reusable to a very great degree: in one Swedish case up to 80-85% of the concrete elements of a demolished block of flats were judged to be suitable for reuse. 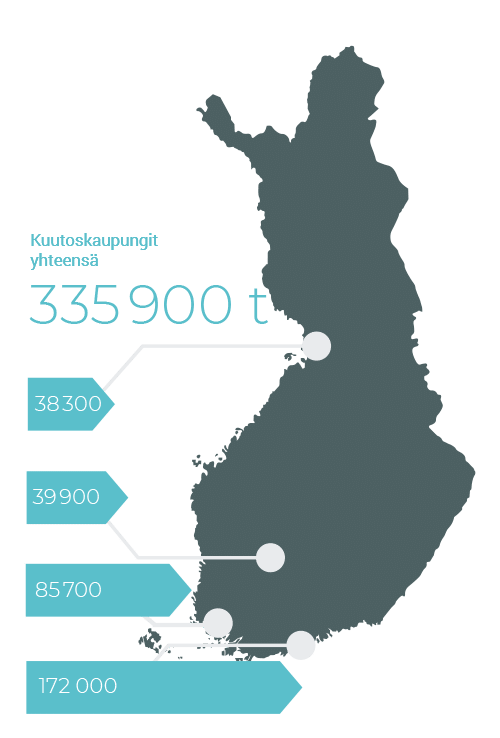 It can be assumed that reusable components are mainly derived from demolition and renovation work. According to a calculatory estimate based on constructed surface area, about 408,000 tonnes of construction waste were generated in the capital region in 2016. Of this, about 229,000 tonnes were renovation waste and 114,000 tonnes demolition waste (Waste flows of the Helsinki metropolitan area service, 2017). If we assume that 50% of renovation and demolition waste is suitable for reuse, we end up with a rough estimate for reusable components of about 172,000 tonnes. When applying the calculation method used for the capital to the Tampere area, the corresponding figure would be 40,000 tonnes, while in Oulu it would be 38,000 tonnes. It has been estimated that 199,000 tonnes of construction waste is produced in Turku (V-S liitto, 2017), of which, if we use the same assumptions, approximately 86,000 can be estimated as being reusable. In reality, it is impossible to give a precise estimate without practical experience. 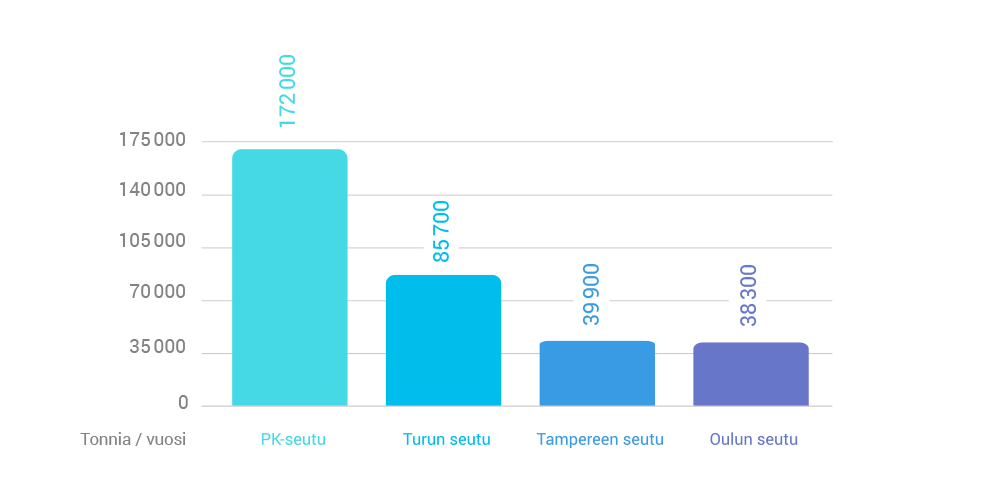 In all of the metropolitan areas a need was experienced for new innovations to further the reuse of old building components. These include:

Challenges and opportunities for business

As of now, there is no significant economic incentive for the reuse of building components, as there is little demand for already-used components and their prices are low (Ministry of the Environment, 2014). The element systems used in buildings have also not been designed to be dissembled intact, which is the prerequisite for reuse, and the Finnish actors in the construction business do not have much experience in this area (Huuhka, 2010; Lahdensivu et al., 2015). Because disassembling elements intact is, in practice, largely manually performed, the higher labour costs involved when compared to the use of new materials also somewhat curbs the enthusiasm for reuse of materials (Huuhka, 2010). Many recyclable materials are somewhat unfamiliar as construction materials to Finnish construction industry participants, who generally also react conservatively to the thought of reusing building elements; to architects, reusing building elements can appear to be a burden that limits design freedom, and engineers would rather not take the risks that may relate to the use of non-standardised materials (Huuhka, 2010). In Finland, the external structure of a building is exposed to relatively erosive weather conditions, and the quality of the structure with regard to its potential reuse always needs to be determined on a case-by-case basis. Structures which are exposed to weather conditions often do not meet the requirement of a fifty-year life cycle, which also limits the potential for the reuse of the external structures (Lahdensivu et al., 2015).

Therefore, large-scale, professional businesses centred on the reuse of building components are virtually non-existent in Finland. Experts estimate that only under one percent of the materials from buildings that are demolished in Finland are then reused. Globally, however, in countries like Great Britain and Germany, businesses have already been built around the trade in used building components. The demolition sites are often located near new building sites, in which case even local reuse could become possible. (Saarinen 2015). Concerns raised regarding the reuse of construction waste involve cost and the inconsistent quality and quantity of the waste. Differences in room heights and therefore structures can also pose challenges in terms of reuse. (Hradill et al., 2014)

The evaluation of construction materials in a laboratory is expensive and raises the cost of reuse. However, the cost could be reduced with standards or if information on the construction materials could be relayed to future demolishers. For example, demolition instructions could be attached to 3D building blueprints in the planning phase, to be saved for future demolition organisations. When planning new buildings, it would be necessary to consider their properties in the light of demolition and recycling. (Saarinen 2015).

According to the results of pilot experiments, reusing materials can also lead to savings. In an experiment carried out in Kummatti in Raahe, it was observed that reused elements which had been taken from blocks of flats produced a 30% saving in costs when the materials were later utilised as carports. In Berlin, a savings of 25% was achieved by reusing concrete elements (Saarinen, 2015). Opposing estimates of cost effectiveness have also been made. The result of the Myllypuro demolition experiment was that the work process was ten times more expensive than traditional demolition (Huuhka, 2010).