In 2015, a total of 280,000 tonnes of construction wood waste was produced in Finland (Tilastokeskus 2017). Of the building construction waste, as much as 41% is wood-based waste (Ympäristöministeriö 2014). The wood waste from construction mainly consists of auxiliary materials, such as packages, mould boarding, and various losses (Perälä 1995). The quality of wood waste often varies, and it may contain damages due to moisture and mechanical contaminants, such as metal parts and concrete residue (Kojo & Lilja 2011; Manninen ym., 2015; Myller, 2015; Ympäristöministeriö 2014). 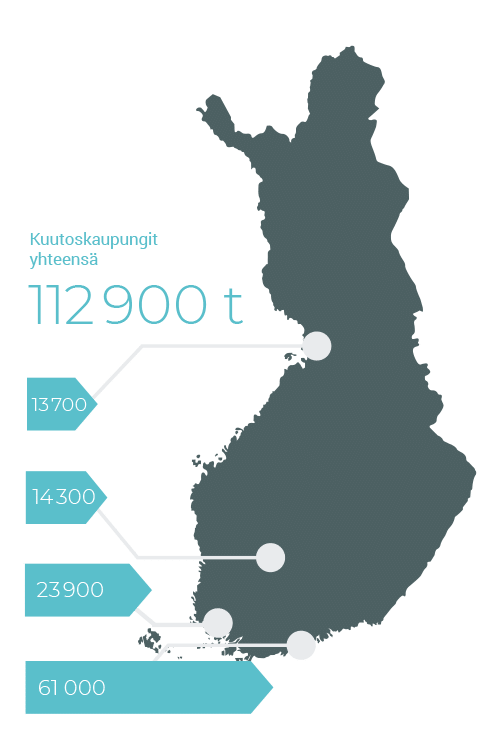 In 2016, approximately 20,000 tonnes of wood waste was received by HSY (HSY 2017). The majority of the wood waste that ends up at HSY is utilised as energy. However, currently part of the wood waste (approx. 3,000 tonnes a year) is also recycled into a stabilising medium for composting. In the Turku region, Lounais-Suomen Jätehuolto Oy received 11,000 tonnes of wood waste that ended up in energy recovery (Alijoki 2017). In the Tampere region, Tampere Regional Solid Waste Management received 7,000 tonnes of wood waste that ended up, as partly chipped, being used as a stabilising agent for composting (Pirkanmaan jätehuolto 2016). In Oulu, Kiertokaari Oy received 5,000 tonnes of construction wood along with construction waste, and it ended up being used in energy recovery. In addition to wood mixed with construction waste, Kiertokaari Oy also receives annually approximately 8,000 tonnes of so-called raw wood directly from businesses and consumers. After the wood has been chipped, the material flow is delivered directly to Stora Enso for energy recovery and the ashes generated during the incineration are utilised as forest fertilisers. In addition municipal operators, private companies also receive part of the wood waste.

Despite the decrease in the amount of statistically monitored construction wood waste (Myller 2015), it still is a truly significant material flow and increasing its recycling rate is essential in order to meet the requirements of EU’s Waste Framework Directive and to promote the implementation of circular economy. Furthermore, even though the possibilities of recycling waste wood in accordance with the existing practices and with current techniques are scarce in Finland (Myller 2015) and even though energy recovery is justified from the point of view of avoiding the use of fossil fuels, the recycling of high-quality wood waste is an environmentally sound solution. This, however, requires that suitable markets are found for the recycled product. (Myllymaa & Dahlbo 2012.) 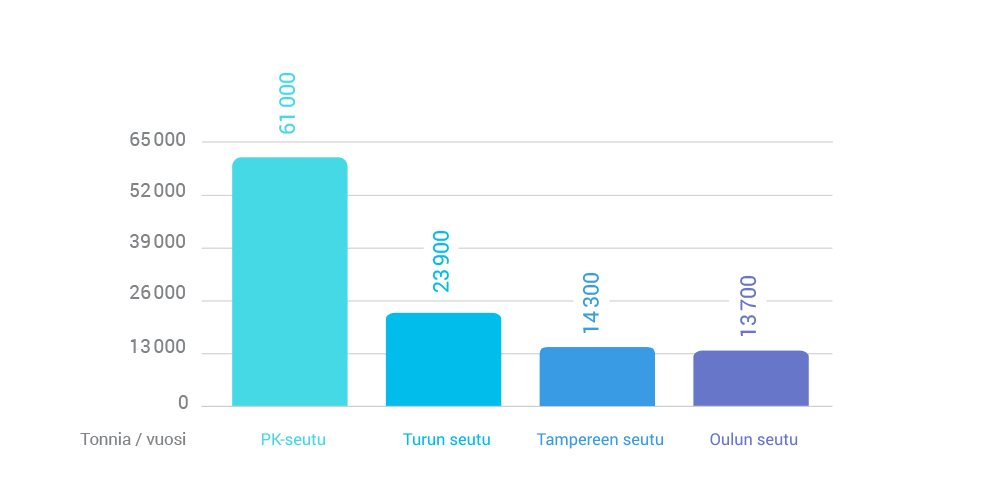 At the moment, in Finland, there is no large-scale industry that reuses wood as a material (Myller 2015). In Finland, the recycling concepts are very small-scale concepts and based exclusively on so-called downcycling solutions, in which wood waste is downcycled into a lower-grade product when compared with the original (Myllymaa & Dahlbo 2012). Interest in the innovation of new recycling solutions is partly discouraged by the strong demand for wood waste as raw material for the energy industry (Myller 2015). In Finland, the great supply and low price of virginal wood and the good availability of high-quality forestry by-products reduce the demand for wood waste as a recovered material (Kojo & Lilja 2011; Manninen ym., 2015). In addition to prejudices, often actual problems restricting reuse, such as moisture damage and mechanical impurities, are related to the quality of wood waste (Kojo & Lilja 2011; Manninen ym., 2015; Myller 2015; Ympäristöministeriö 2014).

The identification of recyclable wood waste requires a significant amount of manual work, which increases the price of recycled wood (Myller 2015). The strict legislative quality requirements for construction materials also hinder the recycling and reuse of wood waste (Manninen ym., 2015). Furthermore, in Finland, there are logistical difficulties related to recycling, as the long distances may easily raise the transport costs to a non-profitable level when compared with local energy recovery (Myller 2015).

Due to its machinability, wood waste is, in principle, well-suited even for reuse, since it is easy to modify wood by extracting damaged parts and shortening items that are too long (Huuhka 2010). Wood waste can also be utilised as a material by manufacturing, e.g., chipboard, wood composites, wood fibre yarn, or foam sheets from it. The prerequisite for material recovery is, however, the high quality and cleanliness of the waste wood (Manninen ym., 2015; VTT 2015). These features could be significantly improved by rationalising and harmonising the greatly varying wood waste sorting practices at construction sites and increasing weather protection during storage (Myller 2015).

In many respects, Finland is a challenging country for the recycling of wood waste, as the supply of virginal wood is great and the long transport distances increase the costs of recycling. Transportation could be rationalised by crushing the wood waste, although reducing the lump size also eliminates part of the possible recycling options. In addition, possible contamination and durability requirements for the wood also set their own limitations. Recycled wood can be used in secondary applications for which the strength classification is not required, but the supply and demand is not considered sufficient. In addition to small-scale pilot projects, there is, at the moment, no industry in Finland that utilises wood waste as raw material in the large-scale production of new products. (Myller 2015). In some cases, the lack of demand for the end product may be a factor that affects the profitability of business operations more than, e.g., the lack of technology.

In Central Europe, and particularly in southern Europe, produced wood waste is commonly utilised as a raw material in the chipboard industry. This is not, however, very suitable for the conditions in Finland (Myller 2015). According to a report by Myllymaa et al. (2008), increasing the use of wood waste in chipboard production would not save virginal raw material, as the raw material is, in its current form, already a by-product.  Instead of chipboard, the utilisation application for waste wood could be the use of recycled wood in the production of neutral sulphite semi-chemical. Alternatively, waste wood could be used to replace materials other than wood, such as plasterboard, bricks, or concrete in building board products or metal or plastic in furniture (Myllymaa 2008, refers to Jaakko Pöyry Consulting 2005).

The results obtained by Rautkoski et al. (2015) suggest that wood fibre yarn and foam sheets can be successfully manufactured from waste wood.  For instance, blue stain (mold) does not prevent recycling and the rock and metal material does not prevent defibration.

In North America, Great Britain, and the Netherlands, waste wood is used in, e.g., the manufacture of wood panels and as floorboards, external cladding boards, and loading pallets. Furthermore, waste wood is also used as mulch and a base material for, e.g., animal shelters, playgrounds, and footpaths (Myller 2015, refers to BSI 2012).