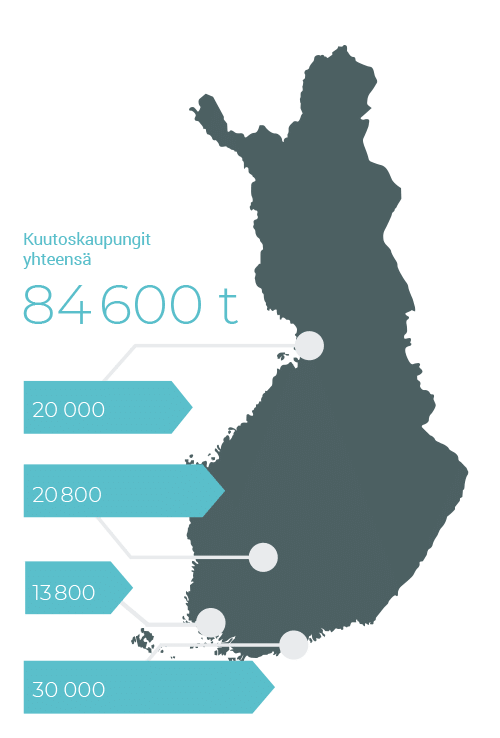 Plastic waste produced in end consumption mainly consists of various packages and utility articles. Plastic packages fall under the so-called producer responsibility, i.e., the producers of plastic packages, or the producer associations formed by them, must organise the related waste management to the extent stipulated by law.

Plastics are oil-based materials and they are divided into seven types: polyethylene terephthalate (PET), high-density polyethylene (PE-HD), vinyl, i.e., PVC, low-density polyethylene (PE-LD), polypropene (PP), polystyrene (PS), and other plastics (Suomen Uusiomuovi ry). The importance of the post-use treatment of plastics is emphasised, on the one hand, by the long lifecycle of the material that may last up to hundreds of years, and, on the other hand, by the short lifecycle of the products manufactured from plastic; approximately 50% of produced plastic is utilised in the manufacture of disposable products (Hopewell ym., 2009).

Plastic waste can be recycled as a material and utilised as energy (Muoviteollisuus ry). For material efficiency, the most desirable option is the primary reuse of plastic, i.e., the converting of recycled plastic into a product with the same properties as the original one. Particularly the recycling of municipal plastic is hindered by the heterogenous consistency of plastic packages; in addition to several polymers, plastic packages also often contain other materials, such as metal, paper, additives, fillers, colourants, and food residue (Eskelinen ym., 2016; Hopewell ym., 2009).

In 2015, approximately 2,700,000 tonnes of municipal waste was produced in Finland (Tilastokeskus 2017). Of that amount, approximately 13%, i.e., 350,000 tonnes, was plastic (Salmenperä ym., 2015). The amount is predicted to increase further in the future (Salmenperä ym., 2015). These plastics will end up in either PET plastic recycling in the form of plastic bottles, the collection of mixed plastic packages, or mixed waste.

From the collection of mixed plastic packages, the plastics will end up at Fortum’s plastic refinery. At the moment, the majority (approx. two thirds) of the plastics is directed to recycling, i.e., to be used as a raw material in the production of plastic bags, wood-plastic composite, or plastic objects (such as flower pots and plastic pipes). (Saarimaa 2017.) The annual treatment capacity and, consequently, the target level of the plastic refinery is 20,000 tonnes  (Anderson 2017).

According to Fortum, 140,000 tonnes of plastic ends up in mixed waste in Finland every year (Fortum 2017a). In Finland, mixed waste is mainly utilised as energy at the waste-to-energy plants. In Fortum’s Circular Economy Village in Riihimäki, there is also a plant with a 100,000-tonne capacity where different waste types can be mechanically separated from mixed waste (Fortum 2017). In 2016, LATE sorting plant was commissioned at the Kujala Waste Centre in Lahti, Finland. The plant complements the sorting at the place of origin with an annual capacity of approximately 65,000 tonnes (PHJ 2017). In addition, a mechanical-biological treatment plant is also being planned for the Oulu region (Ympäristöministeriö 2017). 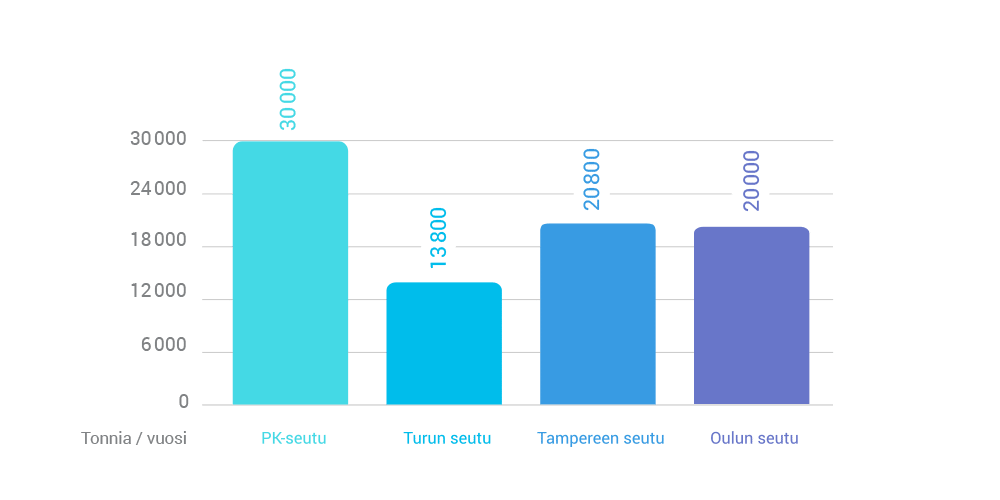 There are still many innovation needs related to the recycling of plastics, as there is currently still room for improvement in the quality of plastic waste. Furthermore, the yield needs to be increased in order to achieve the recycling rate objectives.

Business is already being conducted on the recycling of clean and homogenous industrial plastic, whereas in the case of heterogenous municipal plastic, this is more challenging. The tightening of legislation and the efforts to implement circular economy require the rationalisation of plastics recycling. In order for the economic appeal of the rationalisation to be improved, the demand for recycled products would have to increase significantly. This could be achieved, e.g., with the aid of public procurements. (Eskelinen ym., 2016.) Significant economic profits could be gained with the new material recovery innovations related to plastic packages (World Economic Forum 2016), but developing business operations on the basis of plastic waste material flows also has its challenges. Perhaps the most significant element of uncertainty is the aim of disconnecting plastics from fossil raw materials by increasing the production of plastic from renewable and biodegradable raw materials (Moliis ym., 2009; VTT 2012; World Economic Forum 2016), which significantly affects the properties and recycling possibilities of plastic.

In the future, the plastic industry and other industries using plastic in their products should pay attention to the recyclability of the products after they are no longer used. The number of plastic types contained by a product should be reduced and products that contain only one type of plastic, or compatible types of plastic, should be favoured. The use of additives should also be considered on the same basis. (Eskelinen ym. 2016).